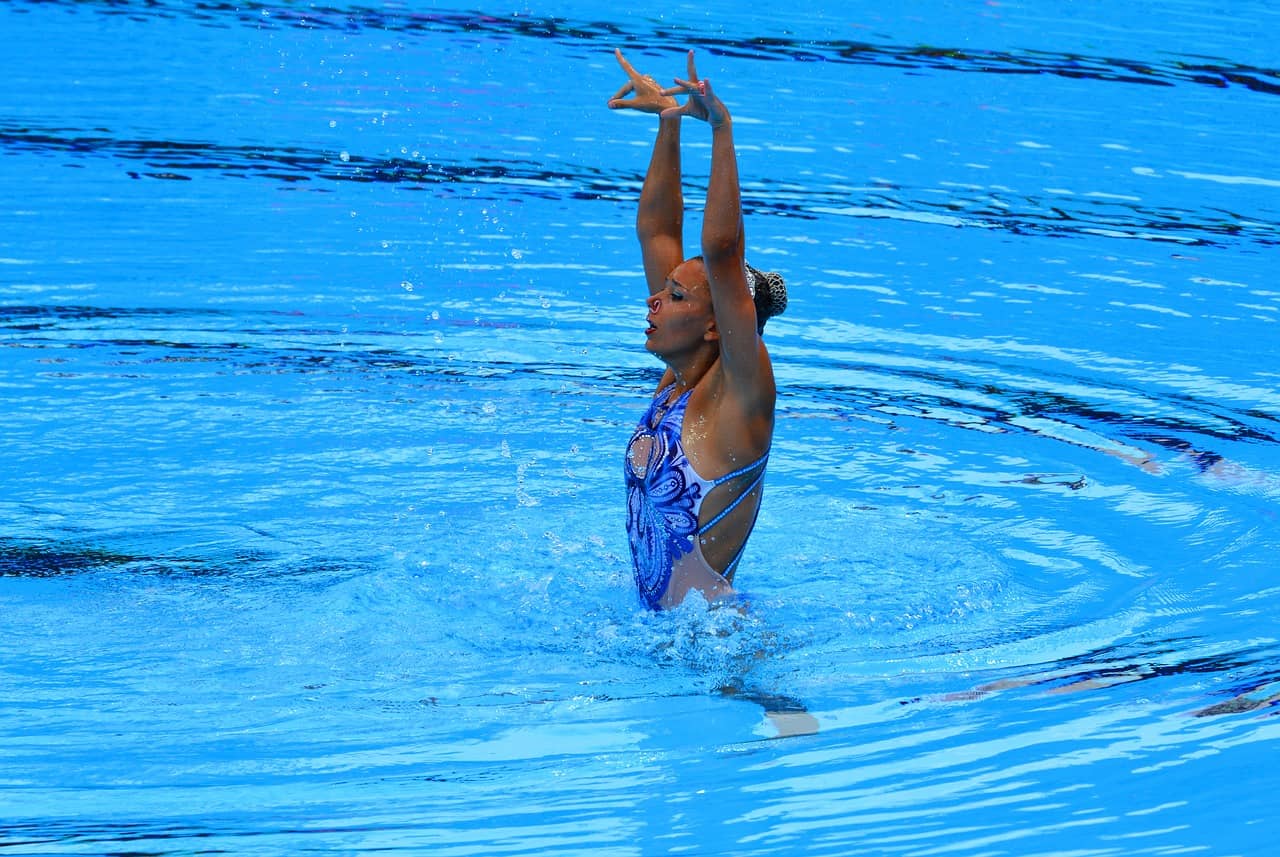 Synchronized Swimming, commonly known as Artistic Swimming, is a hybrid form of Swimming, gymnastic, and dance, involving the swimmers who perform a synchronized routine of elaborate moves in the water, accompanied by choreography and music.

Synchronized Swimming, also called Water Ballet, is a type of swimming sport in which the movements of one or and more swimmers are synchronized with musical support. This sport is known as water Ballet because of its similarity to dance. It is a strenuous yet skillful and creative sport. The sport of Synchronized Swimming requires a massive endurance level as the synchronized swimmers often have to hold their breath for more than minutes at a time.

Synchronized Swimming is a sport that demands an advanced level of water skills and requires excellent endurance, flexibility, grace, strength, and precise timing, as well as breath control ability when upside down underwater. The competitors show off their flexibility and power that are required in performing challenging swim routines.

This was all about the present scenario of synchronized Swimming, but do you know anything about its history, like where it came from or when it began? If no, then we are here to help you out. Please read the complete article to know about the history of Synchronized Swimming along with its advantages, disadvantages, injuries associated with it, the judging and scoring pattern of it in the Olympics, and many more things.

In 1907, an Australian lady, Annette Kellerman, caught and grabbed the entire nation’s attention by performing in a glass tank at New York Hippodrome. Then she was popularly known as the underwater ballerina. After few years, a group of women in Canada has developed what they called Ornamental Swimming.

During the late 19th century, the sport of synchronized Swimming was only a male event. However, by the mid of the 20th century, it became a female sport too, with men being banned from many competitions. In the United States, men were allowed to participate in Synchronized Swimming with women until the year 1941, when it became part of AAU i.e., Amateur Athletic Union. As per the rules of AAU, the men and women were required to compete separately, resulting in the decline of male swimmers.

The Big Names In Synchronized Swimming

The all-time great and famous names of Synchronized Swimmers at the Olympic Games are the Russians Anastasia Davydova, Natalia Ishchenko, and Svetlana Romashina. All of them have won five gold medals each. And the rest have won 3 gold medals each.

Judging And Scoring Of Synchronized Swimming In Olympics

This section will let you know the swim routines, judging, and scoring pattern of Synchronized Swimming in the Olympics.

Free Routine: Under free swim routines, there are no restrictions as to the choice of choreography and music. But the routine length cannot be more than 5 minutes, plus or minus 15 seconds, and the time limit of deck work is 10 seconds.
Technical routine: Under technical swim routines, it will have required elements that the swimmer must perform in a series. All the teams can choose their own music, and they can also add additional choreography, but they cannot perform the elements out of specified order, and the time length is 2 minutes 50 seconds.

The penalties between one, two, or half points, although rarely assessed, may be administered by the referee for the purpose of infractions.

Is Synchronized Swimming Sore For Your Body?

If you want to practice for synchronized Swimming or want to get involved in this sport, you must need to be a strong and powerful swimmer and make up your mind for facing various injuries that you might get in your journey as a synchronized swimmer.

In order to reach a higher level and a high standard, synchronized swimmers are likely to train with the regular speed swimmers who are working on building fitness and stamina, as well as having separate individual sessions which are devoted to working on the transition movements set body positions, and synchronization with the teammates.

Unlike all the other sports, it is quite tricky and challenging to get an entry-level position in synchronized Swimming because it is not a suitable sport for everyone. Your best chance of getting into the sport of Synchronized Swimming would either be searching for any local swim teams that welcome newcomers or contacting local swimming associations who can guide you in the right direction.

Injuries are indeed an inescapable part of life, especially for those who are athletes by profession. So, if you are a swimmer or an athlete, then you may face various injuries right from the start. From slipping on the pool deck to snubbing out your toe in the middle of the night, you are bound to experience some of the minor and significant injuries, pains and aches at some point during your entire career as a synchronized swimmer. Even a misguided breaststroke kick by a team member can cause you a little damage in many cases.

There are generally 2 types of injuries that are associated with Synchronized Swimming:

The five most common injuries associated with Synchronized Swimming are as follows:

The simple steps for treating the injuries are mentioned below:

As you have reached down to the bottom line of Synchronized Swimming, so how did you find this sport? Isn’t it seem to be cool and creative? The sport of synchronized Swimming has various benefits associated with it, but on the other hand, it is sore and painful for your body as well. You might face multiple injuries during Swimming’s entire journey, but luckily, most of them are minor and easily treatable. Overcoming the injuries will make you much stronger than before, both mentally and physically!

Anything that involves water I just have to get at it. Whether it's going for a dip, Going on a Jetski, Or getting pulled behind a boat on a ring. It's what I love.

61 thoughts on “History of Synchronized Swimming”

Freestyle is a classification of swimming competition, characterized by the principles of the International Swimming Federation (FINA), in which contenders are not obliged to follow any constrained...

We are a participant in the Amazon Services LLC Associates Program, an affiliate advertising program designed to provide a means for us to earn fees by linking to Amazon.com and affiliated sites. We also participate in programs from CJ, Bluehost, ShareASale, and other sites. Diveintothepool is compensated for referring traffic and business to these companies.